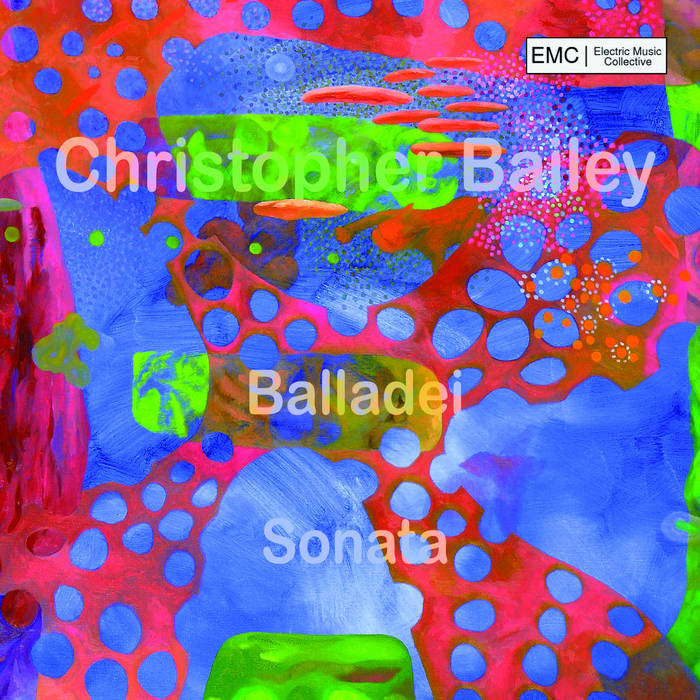 Note: This album was originally released with an early, somewhat skanky recording of the Sonata (due to an {unintentionally} shitty piano) That recording has been since superseded, same pianist, with the one on the album "Glimmering Webs".

In Balladei, 2 “virtual ensembles” that complement the piano contribute to a (perhaps) quasi-medieval sound: the first, featuring sad recorders, bell-like sounds, and piercing viols; the other, made up of honking crumbhorns, some kind of log drum, and lutes. They are tuned in 17 Equal Temperament and 29 Equal Temperament, respectively, which means that at times they mesh well with the piano, and at other times deliciously sour combinations result. Skin drums, woodblocks, cymbals, tam-tams and gongs contribute to a bizarre ritual-like atmosphere.

Balladei will often seem completely abstract, shifting mood and manner rapidly and continuously; on the other hand, a “ballad” is a story, and occasionally, the music lingers for a moment on a narratively suggestive meter, texture, or mood. For example, one might hear the solo piano opening as a kind of pastorale. The first extended “solo” of the electronic sounds (featuring the recorders and viols) might be heard as a kind of inebriated dream sequence (3:33-4:25 ). Clear triple meter occasionally breaks in to suggest dances---a formal Elizabethan thing (4:48-5:28), a funeral march (5:29-5:55), and later in the piece, a crazy rapid jig (11:18 and then at 11:56 - 13:39). At 14:06 - 16:02, another episode of intoxication occurs, as our pianist bangs and shapes clusters played off against muddy clouds of tones in the electronics, perhaps suggesting that the drunken hero of the story mouthed off to someone s/he shouldn’t have. This scene gives way to an odd kind of religious enlightenment: the honky crumbhorns become chanting monks in the low register (16:02 - 17:45 ).

Throughout the work, the pianist is not so much in the role of traditional virtuosic soloist towering above the “orchestra" of electronic sounds (though the part is difficult and requires intense concentration and attention to detail); but rather, the soloist is like a (sometimes petulant) child, cradled by the electronic sounds constantly surrounding her, sometimes responding to them, other times leading them to new places, or bursting free of them.

Balladei was recorded at Werner Hall, University of Cincinnati, February, 2005, by the Christopher Bailey.
Album art by Loo Min-Jong.