← more from
New Focus Recordings
Get fresh music recommendations delivered to your inbox every Friday. 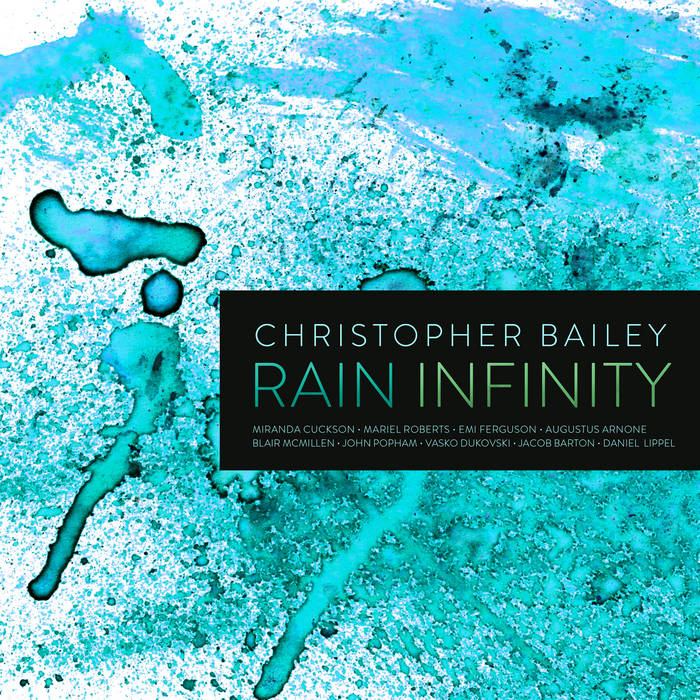 Christopher Bailey’s music mines eclectic sources of inspiration, channeling those influences through a focused set of compositional tools. Rain Infinity includes works for standard acoustic instrumentations, unconventional instruments, and virtual electronic instruments. Bailey’s approach to the material across these contexts emphasizes his exploration of microtonality, fragmentary treatment of motivic and rhythmic ideas, and an interest in establishing composite timbral colors.

The six movement work, Duo for violin and cello, performed here by Miranda Cuckson and Mariel Roberts, is spread out through the recording in interstitial interludes. In each of the movements, Bailey establishes a vocabulary of gestures that are shuffled and reordered between the two instruments, creating a glitchy dialogue. The opening track, “Fast,” contains a series of repetitive mechanisms, composed of strident double stops, accented pizzicati, and nervous tremolandi. “Mercurial” is restless and emphatic, as lines lean into closely spaced intervals before darting momentarily in the other direction. “Dance” establishes a more regular groove and playful spirit than the previous two movements. “Amalgam” is the longest and most melodramatic duo in the set, with shards of impetuous material bursting out from both instruments. “Slow” opens with pads of harmonic color swelling from one instrument to the other. As the movement evolves, punctuated events dot a spare, charged texture. The final duo, and final track on the recording, “TumbleJig,” is animated by a similar rhythmic energy to “Dance,” but is more vigorous and jagged.

Retreat brings the listener from a chaotic street environment, heard in a short pre-recorded fragment at the opening, into a rarefied world of subtle, tintinnabulating microtonality. A brief passage of otherworldly vocoder style spoken phrases is surrounded by a halo of instrumental samples (what Bailey has termed “virtual instruments”) that harmonize the contour of the speech. Gradually, more urgent music eventually leads into a transition featuring stabbing chords that surround a melody on a recorder sound. The close of the piece becomes increasingly sparse, as marimba sounds join the harpsichord, pipes, and a brief return of the processed vocals, for splashes of instrumental color in a dissolving sonic pool.

Written for violin, clarinet, cello, and piano, Timelash (1999) features the largest instrumentation represented on the album, and is also its oldest work. In the piece, Bailey often treats the acoustic ensemble as if it were an electronic instrument, with hybrid timbres that create unique sound envelopes. The piano is a key catalyst for these gestures, either articulating a pitch that is then sustained and shaped in one of the other instruments, or punctuating the end of a sustained phrase, underscoring a dichotomy between short versus long that is key to the piece. The final minute of the piece expertly fuses many of the ideas at play earlier; first we hear a brief echo of Morse-code rhythmic figures in a sotto voce statement, then a fluid klangfarben phrase, followed by a rare tutti rhythmic unison, before the piece closes with a short hybrid gesture that conjures music from the heyday of electronic studio tape music.

Rain Lullaby is written for an unorthodox instrument, the udderbot, which is a blown bottle with flexible pitch. Performed here by Jacob Barton, the work relies on repeating oscillations between pitches over which fragmentary melodies are heard, like disembodied foghorns echoing off of the walls of an abandoned river canyon. Barton’s skillful negotiation of the subtle microtonal discrepancies in pitch is notable, a crucial detail that elevates the piece from a novel use of an uncommon instrument to a fascinating examination of pitch and timbre.

Passacaglia after Hall and Oates 2 is a follow up to Bailey’s solo piano work Fantasy-Passacaglia after Hall and Oates which was included on his New Focus release Glimmering Webs (FCR164). Bailey describes his compositional approach to that work as “minimalism as a way into maximalism,” and a similar deconstructive approach to elemental materials can be heard here. Embedded in ensemble mechanisms are melodic fragments and occasional, airy pop chord voicings. In this case, the minimalism Bailey speaks of refers to the limited motivic and harmonic materials he lifts from a pop sensibility, and he applies a maximalist approach to generate myriad permutations of musical components.

Arc of Infinity places the guitar inside a sonic house of mirrors composed of three "virtual instruments": bell-like sounds, a “dirty sampler” composed out of guitar notes from recent recorded repertoire, and flanged/delayed/filtered sounds. Bailey writes, "Although the guitar is tuned in the usual fashion, a lot of overtone-based "half-diminished" and "dominant 7th" harmonies are found throughout; these relate to the fact that the harmonies of the work often coalesce in Just Intonation around whatever pitch(es) the guitar happens to be focusing on at a given moment."

Bailey casts a wide net in gathering his source material and then manipulates it with a rigorous and targeted intensity. The result is music that is dynamic and taut, but also playful and sometimes dryly humorous. While Rain Infinity skews more consistently towards modernist aesthetics than his earlier keyboard compilation Glimmering Webs, Bailey’s work resists easy categorization, and it is this unique stance towards an amalgam of musical interests that makes his music so engaging and unique.

All tracks recorded at Oktaven Audio by Ryan Streber, except Rain Lullaby (recorded by Augustus Arnone at the Gesundheit! Institute) and Retreat, realized by Christopher Bailey